The Pension Rights Center held a Retirement Security Superhero event to celebrate its 41st year. The event was a huge success with 150 people attending and 54 sponsors. The event featured syndicated journalist Michelle Singletary as our “Retirement Security Superhero” awardee. Michelle, who writes the syndicated “Color of Money” column for the Washington Post, was honored for her succinct and homespun journalism and her ability to explain complex retirement income issues, such as the fiduciary rule, multiemployer plans, and pension advances. PRC board member Deb Whitman, AARP’s Chief Public Policy Officer, introduced Singletary saying, ”She is part Wonder Woman and part Green Lantern because she has a passion for telling the truth  and then she shines a light on subjects that otherwise could be pretty opaque, making them transparent to millions of readers.”

The Center also honored retiree and worker activists for their work to stop pension cuts and to work toward a solution to solve underfunding in multiemployer plans and protect retirees’ benefits. In speaking about the activists, Karen Friedman, the Center’s Executive Vice President, called them “supermen and superwomen and some of the most inspirational people I’ve ever met. They truly represent democracy-in-action.” Friedman went on to say that “Many of these individuals, shy at first, have become fearless warriors, first-rate financial analysts and lobbyists. They have created an unstoppable movement and have inspired legislation. I am convinced their efforts will help stop pension cuts and save multiemployer plans.” 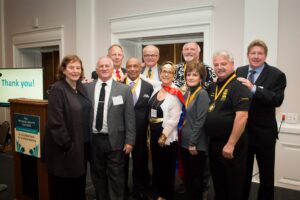 View photos from the event.
All photos provided by Liz Lynch